1/25/2019
Peter Durnan
The Lamp, an online Holderness publication, is a forum for ideas, experiences, and stories. Intended to “generate critical reflection” and “stoke our creative fires” this post, originally featured on The Lamp’s website earlier this month, is Academic Dean Peter Durnan’s reflection on his recent experience visiting alumni families in China.
Holderness is family. I’ve been a faculty member here for a couple of decades and I know with certainty that people pay attention and take care of each other.  Like family. When you have a child, or your dad dies, or even when you just break your ankle, people show up. In your hospital room with a cribbage board, or at the wake with a hug for your mom, or, for weeks, at your door with meals. And not just faculty. It may take new kids a while to figure out the culture, but most do. Students played a significant role in raising our two daughters. In what was once our Connell apartment, pencil lines marking the heights of our daughters Hannah ‘14 and Emery ‘11 in our basement staircase stacked up against measurements of the students who babysat them -- Katie Oram ‘07 and Anya Bean ‘07 and a bunch of others. The boundaries of our relationships here are porous -- students become family and parents become friends and alums sometimes even marry each other. Get a few Holderness folks together and it becomes a family reunion. I’m betting that if you have found your way to these words, you are the choir to whom I preach.
The magic is a little more elusive. Magic is part serendipity, like when alums cross paths on Everest and exchange enough words to realize their common educational DNA. Like the moment a soon-to-be-friend notices your Holderness shirt at the University of British Columbia while you are on sabbatical. Part serendipity and often part risk. Allowing Julia Ford ‘08 to spend the better part of her senior year with the US Ski Team in hopes that someday, just maybe, she will be an Olympian. Sending our seniors out into the world in March to do research for their Senior Thesis projects -- there’s some magic there.
Magic is a unique moment bravely realized.
As I write, both family and magic linger in me.
Things started with an email I received on dorm duty on a Tuesday night in October.  It was from the College Board. They needed someone to present a workshop on teaching the AP English Language and Composition course. It’s a gig I do regularly and happily -- usually to a gang of precocious twenty-somethings who have been identified by their schools as exemplary.  Perfect candidates to pioneer a new AP course at their school. But this ask was for a two day workshop in Shanghai.China. The scheduled presenter had fallen sick. I would have to board a plane the next day. I was sitting in the common room of Pichette when I got the message, and I asked the seniors scattered about the couches if they thought I should pack my bags and hop a plane to China. They were unanimous: “Yah, you gotta do this.”
My wife was less certain. She asked “Are you sure?” a few different ways. And my answer -- a kind of bone-deep “yes” -- felt sure enough for me to send emails to my bosses Tobi Pfenninger and Phil Peck asking them if they thought such a thing was even possible. I would miss three days of classes and trustee weekend.
And then, the magic. Go, they said. Go ahead.
My trip was an eight-hour flight from Boston to Zurich followed by a twelve-hour flight to Shanghai. Last March I led a similar College Board workshop in Zhengzhou, scared beyond my wits, and that experience readied me at least somewhat for this journey. I was fine. I arrived in Shanghai a little after dawn. With colleagues, I toured the city and ended the day at the high school where I would spend two days leading the workshop. I met a local who would be my “TA” -- a great young English teacher English-named Jennifer. Within five minutes we were trading ideas about writing assignments. Work began. Back at our fancy hotel I had the sort of night when you don’t sleep much, nor does it matter that much. Time felt heftily relative.
The next two days were breathtaking.  Thirty teachers learned all they could about AP English. Several were already teaching the course and were hungry for information. Others will teach the course next year -- they were hungry, too. We talked, we laughed, we wrote, we even argued a bit. I do most of my work on the Google platform, a platform fully blocked in China. By necessity and with surprising ease, we shared documents, images, and ideas on the WeChat platform central to communication and commerce in China. The participants tutored me up on this and on much else. Unsurprisingly, the content of the AP English Lang & Comp exam, with its focus on rhetoric, argumentation, and literate citizenry, felt very national, very Americo-centric to these teachers (and I should mention that of the group, most were Chinese, but several were internationals, from the US, Thailand, South Africa. It was an impressive cohort).
So, magic.  Meaningful work in a city and culture I never dared dream I would experience firsthand.  A unique moment I did my trepidatious best to realize bravely.
Then came family.

If you know Holderness, you know that some relationships are precious and outlast the fours years of high school. I enjoy such a relationship with Yiyang Mao ‘17, now a student at Emory University but formerly a student of mine for two years of AP English -- both the Lang and the Lit courses. And she was remarkable both years, one of the most insightful readers I have ever taught -- funny and very quietly irreverent. Her senior spring when I invited the lit kids to read any book of their choice, so long as they had a teammate or two to join them, Yiyang and I read Woolf’s To the Lighthouse together. And knocked heads quite merrily in our interpretation of the work. We are true friends. Headed to her home city, I sent a text her way to ask if she had any advice for me. She expressed more envy than advice. That was Friday.

Sunday at lunch I got a text from Yiyang’s mom, Aimee. She had visited Holderness only once, and we had not met. She wondered if I was free for dinner. The timing was excellent. The two-day workshop finished Sunday afternoon and I was nothing but free. 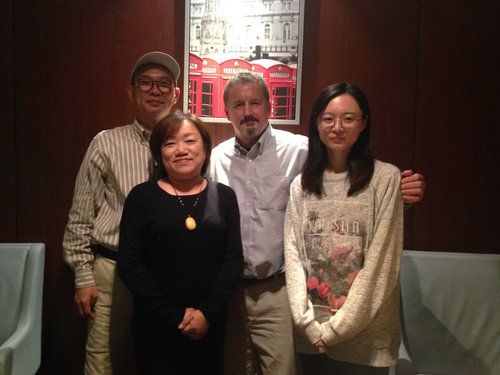 Peter Durnan with Yiyang Mao’s ‘17 family
So it was that I hopped a cab from my hotel in the Pusan district and headed to the far side of Shanghai to meet Yiyang’s parents. I was nervous. How was their English? In truth, I had been attempting a little Chinese language acquisition since travelling to China in March, but I hadn’t managed much at all. To my great relief and joy, Aimee met me at the door of a lovely restaurant in a historic neighborhood. Yiyang’s cousin and soulmate Chenyi Tang joined us, dutifully serving as interpreter.  Our love for Yiyang provided a kind of nexus that quickly pushed us past pleasantry into laughter. At one point I even ventured some basic Chinese:

From Jen, Yiyang’s dad, the laughing question “他认为他是老祖?”  (“He thinks he is Lao Tsu?”)
This was followed by great laughter and Aimee’s insistence that I practice the correct pronunciation of the word “teacher”:
“师!!”
“(my poor attempt)”
“师!!!”
“(another failure)”
“师!!!!!”
We were drawing stares from all corners of the restaurant. Aimee seemed delighted by this. Both Chenyi and I cringed a little.
It was an evening of the merriest conviviality. I am not certain I caught this correctly, but I am pretty sure that at one point early on Aimee said to Chenyi that my wife Kristen and I had been family (“家人”) to Yiyang.  She had lived in our dorm; studied in our classes. I had -- and this deserves some side article -- served as her JV nordic ski coach. Not unfair to call that family.
Another sleepless night and I found myself on a short layover in Zurich, re-connected with the world of Google, confronting emails and assignments and calendars and all those connections to home. I remember hoping that the magic dust of the trip wouldn’t all wash off as soon as I returned home. And even now, a couple of months later, I like to think that it hasn’t.
Back
1/1